With the return of Canada’s Parliament later this month, one of the security issues sure to attract attention is Bill C-59.

It aims to modernize and clarify Canadian national security and intelligence operations. This includes how the country collects and retains metadata, better coordination for oversight and review of counter-terrorism investigations.

Curiouser and curiouser: That seems to be the state of affairs on some Canadian campuses over issues of free speech.

Executives with the Canada-India Foundation were dismayed to have had an event cancelled by Ryerson University this week, with no explanation given.

The CIF Speaker Series had booked space at Ryerson to hear a speech from Tarek Fatah, the author and columnist controversial for his statements against Islamist extremism. Fatah, who writes for the Toronto Sun, is an award-winning author and activist who founded the Muslim Canadian Congress after the events of 9/11 — both to fight Islamism and to alleviate Islamophobia. He is the host of the Zee News TV talk show Fatah Ka Fatwa’ and is a sought-after speaker in Canada and India.

Kevin J. Johnston, 45, was charged with a single count of wilful promotion of hatred following what a statement called “a lengthy investigation into numerous incidents reported to police.”

The Freedom Report website where Johnston posts his radio-host style videos, many of them aimed at the Islamic faith and individual Muslims, remained online following the arrest.

The Canadian Press has obtained a copy of the soon-to-be-released guide and noted extensive revisions.

There’s also a new chapter on the evolution of LGBTQ rights in Canada and a section on how the country has historically discriminated against everyone from Japanese-Canadians to disabled Canadians.

The reference to “getting a job” as an obligation of Canadian citizenship has also been excised.

And so it continues.

The Friends of Simon Wiesenthal Centre (FSWC) has filed a hate-speech complaint with Toronto police about yet another imam who recently allegedly called for the elimination of Israelis and Jews at an annual protest known to promote anti-Semitism.

Maulana Syed Mohammad Zaki Baqri of the Pickering-based Council of Islamic Guidance and the corresponding Al Mahdi Centre allegedly told the June 24 Al Quds Day rally in a combination of English and Arabic that Jews and Israelis need to be eliminated for what they’ve apparently done to the people of Gaza.

Canadian authorities have stripped two former affiliates of the Islamic Society of North America’s Canada chapter (ISNA-Canada) of their charitable status after discovering financial ties between the Islamic organizations and a Pakistani militant group.

The CRA discovered several issues during the audit, including evidence that ISNA Islamic Services facilitated donations that may have ended up in the hands of Hizbul Mujahideen (HM), a Kashmir-based militant group.

Omar Alghabra, Parliamentary Secretary to the Minister of Foreign Affairs (Consular Affairs), announced today that he will visit Abidjan, Côte d’Ivoire, from July 10 to 11, 2017, to attend the 44th session of the Council of Foreign Ministers of the Organisation of Islamic Cooperation (OIC). The council’s central theme this year is Youth, Peace and Development in a World of Solidarity.

During his visit, Parliamentary Secretary Alghabra will have the opportunity to meet with OIC member states and enhance Canada’s engagement with the organization.

The OIC council meetings will offer Canada a distinct opportunity to raise and advance our core values, including human rights, freedom, democratic governance and the rule of law.

The Toronto District School Board is indoctrinating our children.

“Canadian Communities, Past & Present” is a textbook designed for sixth-grade social studies classrooms.

It contains all the usual globalist, crypto-Marxist mumbo-jumbo about motifs like “global citizenship”. But it goes one step further. The textbook discusses things like immigration and war as it relates to Canada and the world. And then, there’s a passage about child soldiers.

It starts off rather innocuously and objectively, describing the UN Convention on the Rights of a child which forbids children under the age of 15 from armed conflicts.

And then begins to name countries in which child soldiers have been used in armed conflict. Afghanistan, Colombia, Iraq, Israel, Libya, Mali, and Yemen. 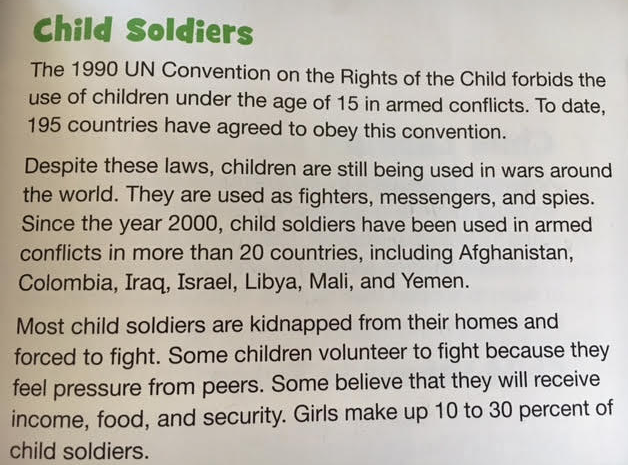 The textbook includes Israel as a country that uses child soldiers.

Justin Trudeau has an accountability problem. Like a toddler, he thinks everything is someone else’s fault and he showed that this week when he held an end of session news conference and blamed the opposition for his failures.

MONTREAL – When Islamist terrorists strike in the West, it has become standard for political leaders to stress that the actions of a few should not tarnish an entire community. On Thursday, Quebec Premier Philippe Couillard chose a different approach.

Responding to the arrest of Amor Ftouhi of Montreal after a terror assault in Michigan, Couillard said the province’s Muslim community needs to do more to prevent terrorism.

“Unfortunately, you cannot disconnect this type of event – terrorism – from Islam in general,” Couillard said in Quebec City when asked if he was worried the attack would fuel anti-Muslim sentiment. He said he shares the position French President Emmanuel Macron expressed this week in a speech to Muslim community leaders.

A Liberal bill that would make it easier for people to become Canadian citizens has passed the Senate, after over a year of back-and-forth in Parliament.

Bill C-6 was designed to repeal many of the previous Conservative government’s changes to how people become citizens — and how they can lose that status.

Among other things, the legislation repeals a provision that strips dual citizens of their Canadian status if convicted of terrorism, treason or espionage.

But far more people lose their citizenship because it was obtained fraudulently and current law gives them no right to appeal, something not addressed in the Liberals’ original bill.

The University of Waterloo in Kitchener, Ontario is set to honor “Dr. Ingrid Mattson, of Huron University College, an honorary Doctor of Laws degree on June 14, 2017.” Mattson’s reputation precedes her: she has numerous connections to jihadist groups.

Point de Bascule reported on some highly disturbing background information about Mattson, referring to her as “another scholar whom the NCCM consults to gain an accurate understanding of Islam”.

He didn’t know it was against the law because the mandate to beat one’s wife is in the Qur’an:

“Men have authority over women because Allah has made the one superior to the other, and because they spend their wealth to maintain them. Good women are obedient. They guard their unseen parts because Allah has guarded them. As for those from whom you fear disobedience, admonish them and send them to beds apart and beat them.” — Qur’an 4:34

So many questions remain, why was this ISIS terrorist attack hidden from the public, why is there no terrorism charges?

Could a Manchester-style attack happen here in Canada? The answer, sadly, is a resounding “yes.”

Asking why it hasn’t happened yet is perhaps more to the point. That’s because we’ve already got jihadists like Salman Abedi, the 22-year-old behind the horrific concert attack, right here on home turf. Dozens of them. Perhaps over a hundred.

How do we know this? Because the heads of our security agencies say so. They’ve compiled the lists, they have the names and have some sense of where the radicals are at. The only thing they haven’t done is charge them.

Foreign money funnelled towards Canadian political advocacy groups affected the outcome of the 2015 federal election, according to a document filed last week with Elections Canada and obtained exclusively by the Herald.

The 36-page report entitled: Elections Canada Complaint Regarding Foreign Influence in the 2015 Canadian Election, alleges third parties worked with each other, which may have bypassed election spending limits — all of which appears to be in contravention of the Canada Elections Act.

While on the ground in Gretna, Manitoba, The Rebel’s Faith Goldy tried to reach out to government officials tasked with running a repurposed retirement home that now houses fake refugees.

The number of anti-Semitic incidents in Canada set a record in 2016, rising by 26 percent over the previous year, according to an annual audit.

In total, B’nai Brith Canada recorded 1,728 incidents nationwide last year, according to its annual Audit of Anti-Semitic Incidents released Tuesday, compared to 1,277 incidents in 2015. The previous record was 1,627 in 2014.

The increase did not appear to have been affected by the election of Donald Trump as U.S. president, B’nai Brith Canada said.

Anti-Semitism is on the rise in the country, a Jewish advocacy group said Tuesday, calling it a “made in Canada” phenomenon.

“That means an average of four to five incidents of anti-Semitic harassment, vandalism or violence occurring every day in our country, a country where we pride ourselves as being one of the most tolerant in the world,” said the group’s CEO Michael Mostyn.

Iconic One Theme | Powered by Wordpress